After my last 5K, I swore I would never do another one. I hate 5Ks, with a vengeance, but Niblet wanted to do one with me to make up for the fact that I didn’t run with her at the last one we did as a family (to be fair, that is the ONLY time I’ve ever won a race).

We decided on doing the local Turkey Trot today and with the ok from my OB since I wouldn’t be racing so much as going 7 year old pace, we bundled up and drove the 3 minutes over because it was freezing.

Kiddo was super excited, she was ready to go, she couldn’t wait to start…The race starts, we make our way around the first loop and see Daddy and her big sister cheering and then hit the first hill. Her mantra instantly changes from “I LOVE RUNNING THIS IS SO MUCH FUN” to “I HATE RUNNING”.  I reminded her it was her idea and she told me she only wanted to do it so I wouldn’t be sad. I told her nothing she could do would make me sad, but Mommy also doesn’t like 5Ks which is why she does Ultras so I totally understood. We hadn’t hit a mile yet. Things are boding well.

So I slowed her down from a 9:30 pace to a 11mm pace and start going into Mom cheerleader mode. You GOT this! We’re running down main street! Isn’t this so cool?

She perks up a bit after a mile and starts to have fun again…and then we hit more hills. Now, I HATE racing and my mindset when I’m running peak speed can be summed up by the phrase “F&CK this sh!t” and it appears that my kiddo decided to vocalize this mindset for the rest of the 2.5+ miles. Nothing I did could snap her out of it. Donuts were promised to her after the race and she kept crying that she hated running and why was I making her do this. I kept reminded her that it was HER idea and she would yell that I bribed her with donuts and she never wanted to run again. This race had a fairly quick cutoff of 45 min and my only goal for time was to not get swept. We had started with 1/:30 intervals which turned into :30/1 which turned into…ok just run to the mailbox. Finally, she saw the finish and we had a strong run into the end when she once again was all smiles. Kiddo PR’d her last 5K by almost 5min and I PR’d for my slowest 5K (13 min slower than my last one) she also managed to beat me by 2 seconds. 2 donuts were purchased and she shared one with her sister. 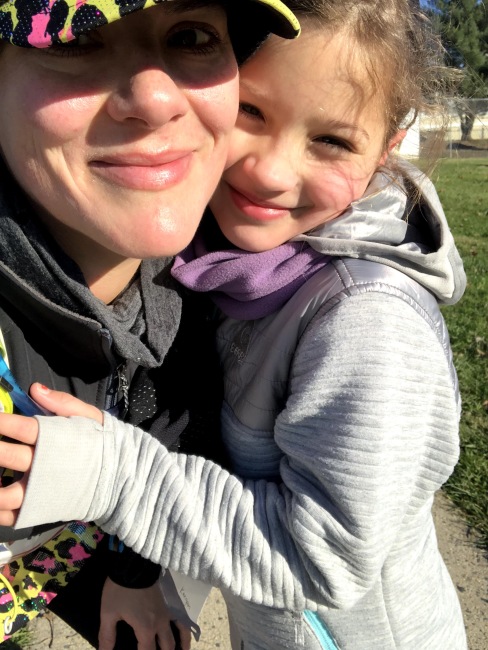 Oh and her verdict on 5Ks? She’s never going to do one again, except maybe one more.