I’ve been a bad bad blogger and I’ve been way behind on race recaps so here goes my perspective on this year’s Marine Corps Marathon. While I’ve done a decent amount of Ultra distance events, I had yet to do a Marathon so my friend talked me into doing the 17.75K to get my ticket and in October I tackled my first marathon distance on road.

Originally, I was doing MCM as a training run to gear up for my 100 miler in December. However, I have an injury on my second toe of my plantar plate so I had been cross training and just running my shorter events. My mileage took a dump back in August and I literally woke up the day of the race and went “whelp, looks like I’m running a marathon”.

I rode in with my friend and her husband and was a little surprised at the amount of walking to get to the start. (3.2+ miles). We linked up with one of our friends and settled in a rough estimate corral. The starting atmosphere was pretty good and I loved the parachutes. 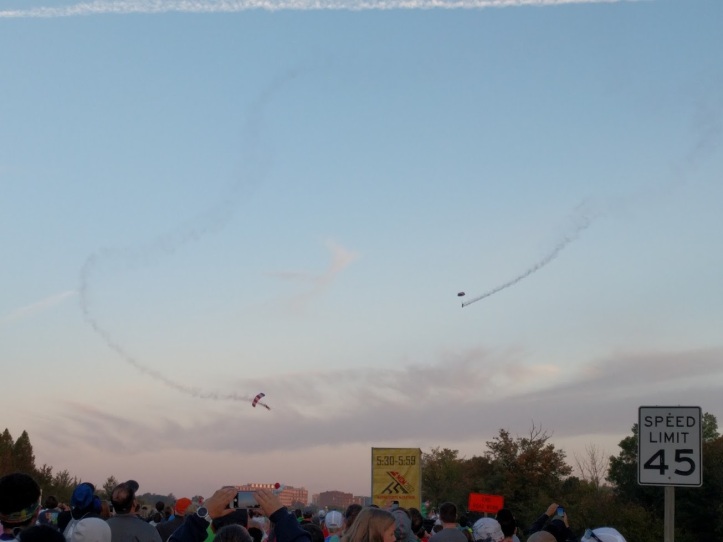 I hit start too early on my Fenix and I had to paused and restart, so I was off the start time a bit. My “goal” was to get a sub 6 so I could qualify for the JFK 50 miler. I don’t have any plans to do the JFK, I just wanted a qualifying time because it made sense at the time to have a goal. Pretty much off the bat, I was separated from my friends by the crowds.  Ok no problem, I tried to get into the energy of the crowd and the spectators. I’ve done “bigger” road races like the Disney Wine and Dine Half. However, I was corral B and wasn’t really in the midst of a huge group like the massive amount of people at MCM. Turns out, big races are not my jam.

Mile 1-5
Stuck downwind of someone wearing a vat of Thierry Mugler’s Angel perfume. (recognized from my high school days). It is NOT a subtle scent and I kept getting it in my mouth. Once I realized I was running solo, I was ready to nope on out with my headphones to try to keep my focus off the amount of people I was smooshed in with.  I tried to keep in the 10s, but kept slipping into the 9’s 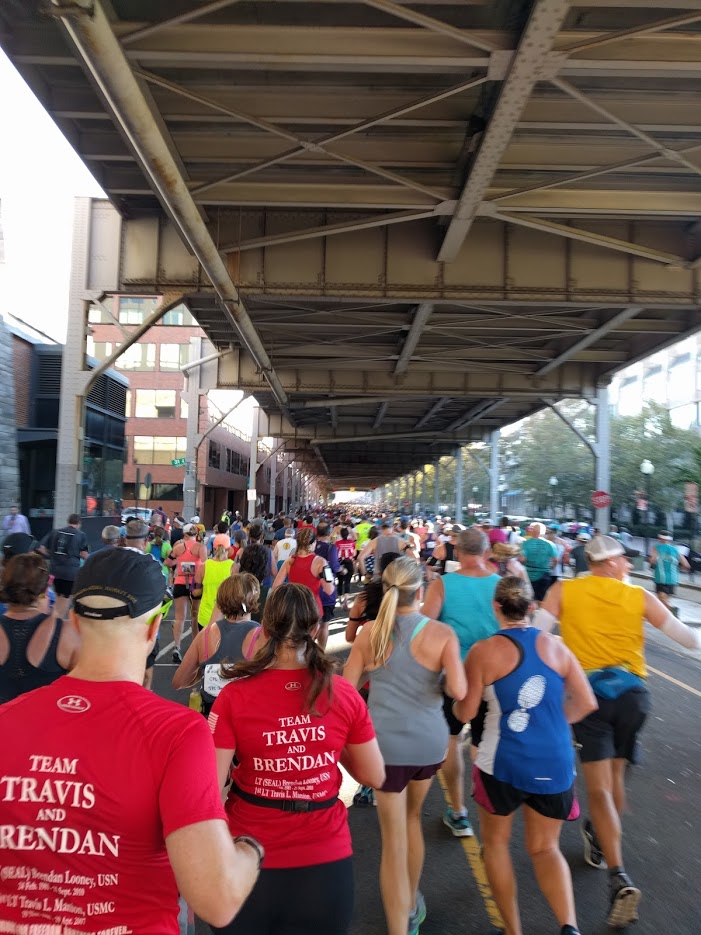 Miles 6-12
I’m feeling pretty good. I have no idea about the course and I kept looking for my friends but I was just cruising along and making decent time. Solidly in the 9s and 10s and feeling pretty good though the heat was hitting. My husband is tracking me online and tells me I’m doing pretty good on time.

Miles 13+
Wheels are off. This was the first time EVER in a race that my stomach went south. I didn’t have enough Skratch with me and I made the mistake of drinking the Gatorade on course which apparently was the “Extreme” version. Temps started to climb and I started to have to fill my front flask on my pack. I start making friends with Porta Potties (shudder). 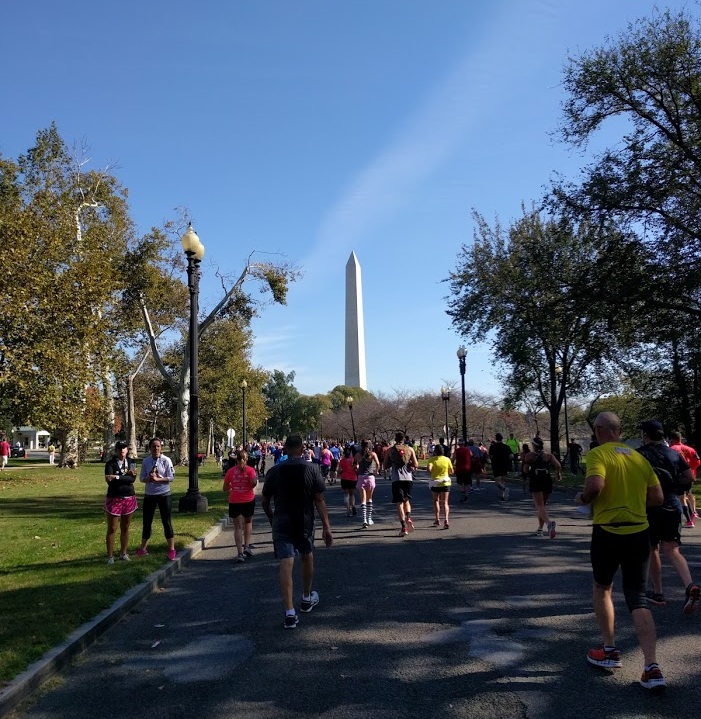 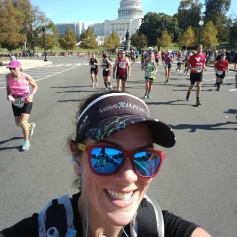 I had no idea when “the bridge” was so I kept asking folks at every bridge if this was it, until I realized it was this nightmare of an overpass. At that point I was run and walking because the heat radiating off the pavement was kicking my trail running butt. The last 5 miles felt like ages. I had pretty much written off making my goal and was just trying to finish when I got to the final hill and just decided to haul ass up it. I hit stop too fast and had to re-start it so I was once again not even sure what my time was. My husband messaged me and let me know that I made my goal with 15 seconds to spare LOL. I ended up at the Med tent though because I kept almost passing out. Apparently all the blood rushed to my legs and when I stopped, bad things happened.  I kept explaining that yes, it was my first MARATHON, but I’ve done a 100K and I swear I’m used to distance LOL.

So would I do it again? No. There were so many things that just bugged the crap out of my about this race and it wasn’t that it was a bad race (it’s a great race). It’s just a super crowded ROAD race.

Reasons why Brie will not be doing a super crowded road marathon again:

Don’t get me wrong, this is an awesome race and the Marines were amazing and it really is a beautiful course and I’m glad I did it. The Blue Mile was extremely moving and I appreciated every bit of the event and all the work that went into it. It’s just that I’m so not a road girl and back into the woods I go.