After changing my mind about the Orange Mud Endurance pack last year, I spent a LOT of time with it. Finally, the straps started to fall apart (from the way I wear them) so I decided to replace them and give it back to my husband and ordered myself a brand new grey Endurance Pack.

Which I hate. I’ve used it ONCE and it will be banished to never be used again. (Update: I’ve used it for up to 26+ miles and on several 20 something milers…have NOT changed my opinion).

Why do I hate a pack that I LOVE in another color/version? So many many reasons.

First of all, the pack material in theory should be awesome, it is their new grey mesh material. However, it may add durability but it lacks stretch. My old Orange Mud could fit so much in the pockets, the new one BARELY clears my Nexus. I could not fill my front flask all the way because it wouldn’t fit in the pocket. They’re a ton more shallow because of the lack of stretch.

I’ve worn it for one half marathon and my phone kept creeping out of the top. The grey material is also a mess after one run. The black fabric on the pack isn’t color fast and after one run, it looks like camo. I tried to wash the few spots out and more came out. We finally had to sit it on a plastic stool to dry because we were afraid to hang it anywhere the dye could stain. The new material also isn’t as soft on the body and could definitely lead to chafe on longer runs. 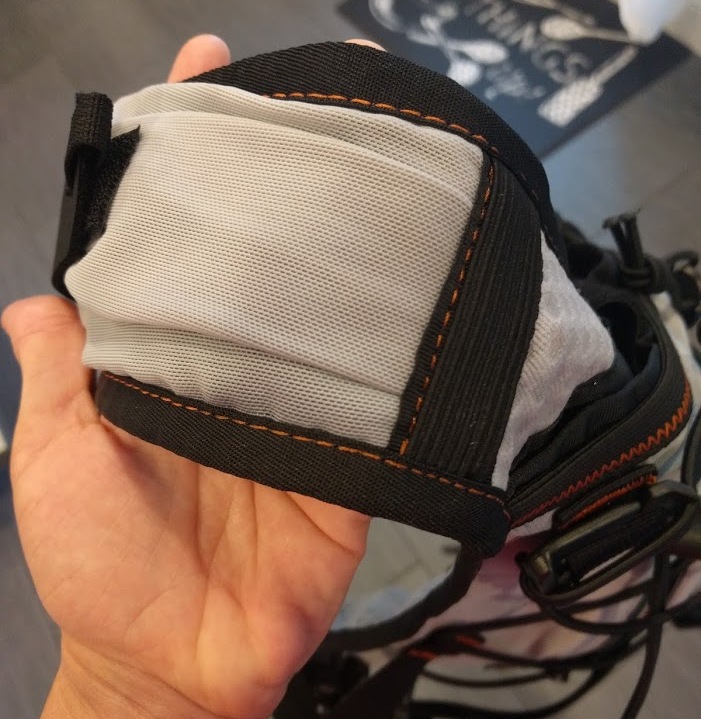 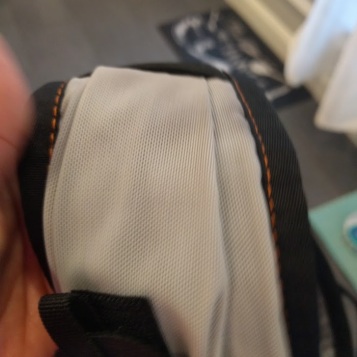 The new hydration pouch it came with was the Elite Hydrapak and maybe mine is bad but it is nearly impossible to close or open. This is my 4th Hydrapak and the first time I had to enlist my husband in closing it and opening (I ultimately went with my 1.5 Liter Salomon).

They changed the straps to hold down the tubing for a stretchier material so I can no longer use my magnetic tube trap and that meant that no matter how I tried to lock down my tube, it would bounce loose and start swinging all over the place.

The fit is different on me too, the cross straps don’t cinch down as tight partially because the new buckle is larger but mostly because the rails aren’t as stretchy as the previous pack. I had my previous one on the top and bottom and then crossed, which didn’t work with the grey pack since there isn’t enough give and I had a HUGE gap in the front. I could NOT get this tight enough in the front.

There were a couple of nice things that I liked about it at first. I liked the grommet closures on the front pockets b/c the lack of grommet on mine was leading to some ripping and I liked the thinner material in the back. I loved the look of the pack before it started to bleed as well.

This was a birthday present to myself and as much as I really love Orange Mud as a company, I’m really rather dissapointed in this pack. The bleed issue alone means I can only wear it with black shirts or risk ruining other colors and I like to keep my packs looking pretty (even though they may smell like death) and the splotching on it looks terrible.

I still recommend the OTHER endurance packs they make. Just not this one. Try to find one of the packs with the small clips on top and bottom if you can.