Last year I had 3 races that all managed to be on the SAME exact weekend this year. I couldn’t find a Ultra that fit into my time frame so I decided to make my own. The plan was to run from Great Falls, MD to Harper’s Ferry WV. I was lucky enough to have a husband who fully supported my insanity and we decided to make it a family camping/mommy is clearly batshit crazy weekend and I managed to convince a friend to go along with me.  I had mapped out a spot on the way to refill water and then we had 2-3 points where my husband could meet up with us with our drop bins and another spot where he could drop the dog off and we could give her a little exercise before heading to camp.

I had a map, I had GPS directions to each of the aid stations, I knew we were going slightly uphill so I had a plan to start in my Escalante and then change into my Carson’s going into the portion of the trail that overlapped with the AT. Let me reiterate this. I HAD A MAP.

We set out from Great Falls and were gleefully hauling ass and taking photos. At one point we converged with a a few races on the trail and had a brief tiff with a guy who instead of jumping over the world’s tiniest puddle, decided to jump into the puddle and sprayed us both down in mud. As the world smartest trail runners, we may have tried to tell him the error of his ways when we passed him at the finish which ended with a little verbal disagreement and tandem middle fingers. We were heading towards White’s Ferry and we…WTF WHY ARE THERE BUILDINGS??? WHY ARE THERE….oh shit. After a panicked google mapping we realized that we went the wrong way on the canal path…

All the signs were there. We were oh, I don’t know…going DOWNSTREAM, downhill, the locks were going down in number, as were the mile markers.  Everything except a big neon sign that said, turn around dumbasses you’re going the wrong way. I HAD A MAP! Frantic phone calls were made and we realized if we were going to do this, we were going to be self supported. The new pickup point was now White’s Ferry and that was contingent on there being a water fountain up and running at Great Falls.

So we turned around and have now gained ourself a stalker for about 1 mile as the rude runner jumped on his bike and told us how it was our fault that he splashed us since we were clearly taking up too much room on the path and how HE was racing a 5K and how dare we get in his way. Sidebar: This trail is wide enough to run about 5 or 6 people across and my friend was actually behind me and we were over to the right. We passed the puddle again and were flummoxed on how this guy couldn’t get his legs over something that was about 8 inches across and was literally one of the only puddles on the entire trail.

We made it back to Great Falls at mile 24 and were lucky enough to find water and decided to keep going. Luckily we had packed enough snacks to support us calorie-wise but we were now committed to one pair of shoes each. C&O canal is flat but very very gravely and at about mile 35 were started hiking more and our time started getting slower.  At about mile 37 we re-evaluated our pickup spot when my husband told me that I may need to save something for the campsite because it was a bit farther then we thought. Uh oh. 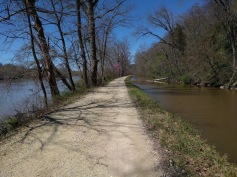 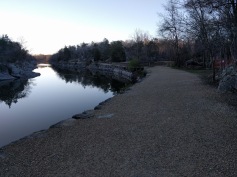 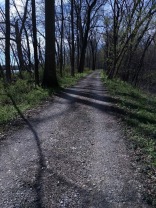 Mile 40 was spent walking and making up songs. Mile 41 is when we were were picked up by our ever suffering husbands. My friend headed off to get a burrito and we headed off to camp.

Know what is AWESOME after running 41 miles? A .25 mile walk to your campsite. Even better is finding out the bathhouse is .30 each way and is on the top of a GIANT hill (per Garmin it was 3 stories each time up). So that’s what he meant by “saving something”. I think I logged 7 miles just from taking tiny humans for potty visits. Why not pee on trees you say?

Well during the day, our primitive site was under a zip line course. Which made our campsite VERY busy when a group of zipliners got stuck once or twice or three times. No really…

Moral of the story? Check your maps and make sure you know the area you’re camping in well. Also, have a sense of humor and beers…so many beers.