I’m going to preface this review with saying right up front Salomon’s Warranty is a joke. This will ultimately become a review/rant. I’m a big fan of their shoes and their Fastwing jacket and I picked up the 5Set (seriously Salomon the names..please fix…thanks) on the glowing recommendation of fellow Ultra runners. Since Salomon loves to make the longest product names in the history of the universe, I’m calling these packs the 5 and the 12 because the S-LAB ADV SKIN 12SET is just too much to type. The warranty process us a total pain in the posterior and I’m still dealing with the process 3 weeks and counting.

I wore it for 3 times and loved it, but noticed that the pack was wearing WAY faster than it rightfully should. The front bottle pocket was unravelling and the pouch in the back looked like what happens to my tech shirts after I run wearing a pack. It turns out that putting ANYTHING in the back pouch, causes the weight of the material to pull down and rub against the stiffer black material that gives the bag it’s structure. Plus, I had some sketchy looking stitching that was right on the edge of the material and looked like it would pull out of the stitches fairly easily.

3 runs and less than 10 days and it should be an easy exchange, right? Nope, they are backordered until at least December and since my big race this season is also in December, I decided to try to go through Salomon because I would have thought that they would have packs available. HA HA HA spoiler alert…NOPE!

Their warranty works like this. You send in photos, they tell you 3 days to 7 days before it gets approved and then they give you a credit to the site to replace the item. What really happens is that you spend almost an hour on hold wondering where your claim is and find out they are completely inundated with claims and will try to get you processed as soon as possible so you can get your pack replaced….Then after talking to several reps, you find out they are sold out (they LOVE to tell you how popular the packs are) and may not get any until Feb, but hey you can use the money for gear. You offer to pay the difference for the next size up and they agree to process it and tell you it will be later that day. Only to get a email telling you it could be several more weeks to get approved for a warranty claim and oh so sorry, the next size up is gone too…have they mentioned how popular they are?

In the interim, I got the ok to sew the bag up from my original purchased store and was on the backlist for the pack should they ever get it in my size. Which eventually did happen and I was able to get a replacement. At the time, I really I wished I could just move on,  but I liked the pack enough to try to hunt down the 12-Set for my 100K race (Zappos to the rescue).  At first I thought that the 12 was superior to the 5 in several ways. Notably, it had enough storage for my phone, extra pockets, and I liked the extra zipper on the outside. However, it too had a couple little things that I didn’t love. Though it is currently my go to pack.

So on the 5, what do I like? Well the pockets for one. It has so many pockets that I was easily able to stash my headlamp, arm warmers, hat, snacks, a 1.5 liter bladder (it does not come with one) and keep one of the front flasks with my Tailwind. The other front pouch I had to use for my phone because once again, the phone was too big for any other pocket. The side zips I used for my med kit and my ” for when nature calls” kit. The pack is light, it doesn’t bounce, it looks kind of badass and I can cram many waffles in it. The 12 fits even more waffles.

The bad? Besides the first one falling apart off the bat, I’m not crazy about the straps. You have to do this weird neck turn thing to get the top ones secured and the latches feel sort of flimsy and you hook them to each side on a little loop of material. It works ok but for the price it feels a little…..meh. On the 12 set, there are two sets of compression straps and a 3rd strap that is also on the 5Set for poles. While not a problem on longer races when I was wearing winter gear, I’ve started noticing that these little dangly bits keep eating my hair and I can’t do braids without sacrificing hair to the Salomon gods. 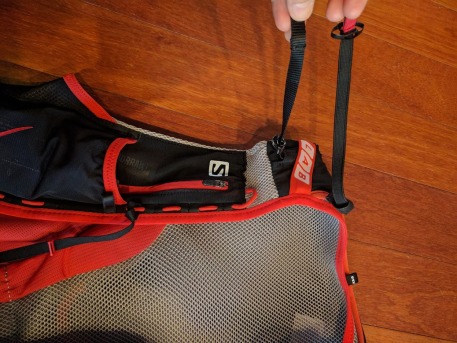 Another con is that they are REALLY expensive. The 5 is $165 and the 12 is $185 and that does NOT come with the bladder.   They are also kind of itchy in a tank top, but not in a deal breaker kind of way, but be aware if you run half nekkie, you’re going to want to lube up first. (Is it just me or did that sound way dirtier than I meant it to?

You have the option to loop the hose under arm, or over the top and I’m still figuring out the best way to not get wacked in the face with the hose. Darn it, now I’m sounding dirty again…sigh.  It’s comfy and I didn’t get a shoulder cramp during the 50K I took it out on or the 25 mile training run I did 5 days later and the 12 I wore for a 50K and a 100K.  For the ladies who are wondering about fit. I’m a US 4-6 and I’m a 34B and I went with the XS/S.

Between the 5set and the 12set, I ended up keeping the 12 and selling the 5…BUT I ended up needing a smaller pack and just ordered the brand new 5 set in BLUE. So yeah…I may have a pack problem.