The Patapsco Valley 50K was meant to be my “fun” race. Mentally, I was going in prepared to PR the crap out of it and get a ego boost as I gear up for my first 100K coming up in December. Also the finisher award is an awesome mug. What can I say, I do strange things for drink ware.

We decided to camp in the Hollofield area of Patapsco which it turned out was about a 20 min drive via highway to the race start. The night before we set up camp, picked up my race packet, and then I spent a good hour picking up mothballs in the rain that the previous campsite tenant lovingly threw all over the ground (sarcasm…expect lots of it here). 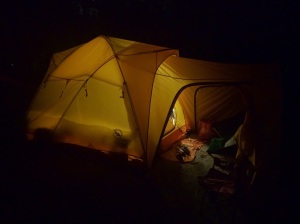 The morning of the race, my crew (aka my husband and 2 kiddos) dropped me off and then headed back to sleep because it was still dark out.  This was my first race with no friends on course and I was a little worried about flying solo. I was super excited when they handed out bonus race swag of a really nice hat. The first dark miles were full of bobbing headlamps and trying not to bust my ass on the first 5 miles. It was expected to be very cold and have high winds.  About 5 miles in, I was feeling AMAZING and I was chatting with some other ladies on their first ultra. Then I looked at my watch. Dammit….never pace with college kids. I was going way too fast and I knew it would bite me in the ass later, but I made the choice to slow down and let them go ahead.

Then the passing began and I started to realize it was a faster field then I’ve had in the past. I was solo for a while and I decided to listen to some music so I popped one earbud in and started to find my pace, which was troublesome since I had a bit of lower stomach cramping that had zero to do with nutrition and everything to do with mother nature having a wicked sense of humor with timing.

I also realized that though I knew the elevation and it was similar to what I train on, I didn’t realize it was mostly in a few sections. Translation…BIG HILLS!! At one point the top of the climb had us bumping into rescue crews who were practicing their repelling. This with high winds made me NOT take any photos because gravity and me are not friends. After mile 12 or so post aid station, I started following another pack right about the time my iPod started to malfunction and it started to voice over all the tracks.

I was operating on cruise control and trying to fix it when I realized the runners in front of me were looking for markers. Uh oh.

You know horror movies when a group of random people stumble into each other in the woods from different directions? This is exactly what happened. Somehow about 4 different groups all converged from several side trails and we all tried to figure out dude where’s my course?

We asked a cyclist if he saw some runners and he pointed to a trail and off we went until we realized it was US he saw. Eventually we found the trail and ended up about a mile off course. 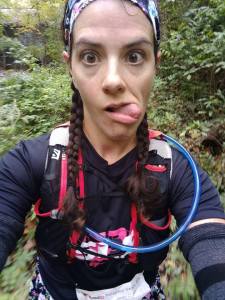 The course is spectacular and I started really enjoying myself despite knowing I was not PRing, though I was a little worried at this point about making the cutoff. Thankfully the drop point was mile 20 and I made it with tons of time to spare. I hit up my drop bag and I swapped out my shoes and gave my husband a status update along the lines of “having my butt handed to me, hope there is beer.” 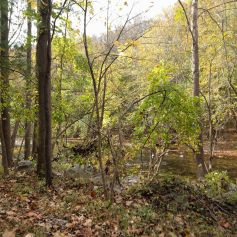 I REALLY enjoyed the last bit of the run. We doubled past some of the cool stuff we saw in the dark but I had been too “serious” about to take a photo when I thought I was racing. I chatted with other runners, I stopped to share my first aid kit, I contemplated what my finisher’s mug looked like. At one point, a fellow runner told me if I hurried, I could break 8 and I scurried as fast as I could up and down those last hills and booked it on the final descent into the finish. I finished with 7:58:01 which made it a PR! Worst time ever counts right? 2 hours before cutoff but seriously demotivated. At that point there wasn’t much food left but there was beer! The finishers mugs were all gorgeous and I selected mine with more care than I probably put into picking out my car. 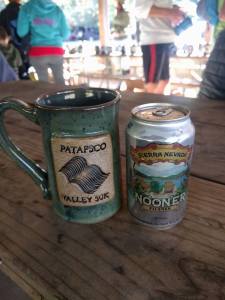 All in all it was a great race. Super great support. Awesome swag (long sleeve shirt, hat, and mug). I’ll definitely be back and next time it will be a PR.